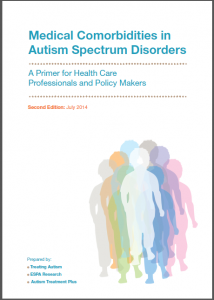 There are several medical conditions that have been shown to be significantly more prevalent in those on the spectrum than the general population.

Autism is a whole body disorder diagnosed by what is observable, however, these signs and symptoms are often the result of underlying co-occurring conditions.  Knowing what to look for is the first step in getting the most appropriate treatment.

Some common co-occurring conditions found in those with autism:

At times, it may be difficult for a health care practitioner to properly assess a patient with an ASD.  The parent or caregiver may not have known to watch for certain signs because they were told that it was “just the autism”.  There may be communication barriers or challenging behaviours preventing an obvious observation of a symptom, or perhaps the patients themselves don’t know the origin of the pain. It then becomes even more important for the practitioner to be able to recognize some of the behaviours indicating an underlying condition.

Behaviours which may indicate a co-occurring condition:

Common sources of pain and discomfort (chronic, progressive or static):

This information excerpted from the Medical Comorbidities in Autism Spectrum Disorder, A Primer for Health Care Professionals and Policy Makers, July 2014.