Mother’s Day is a universally celebrated occasion synonymous with flower bouquets and dinner reservations. As I reflect on the pros and cons of a day set aside to honour mothers and motherhood, I recall that many Mother’s Days in my life shared the spotlight with other significant events – my and my husband’s nuptials no less. I am approaching fifty now and reflecting on what Mother’s Day means to me as a mother. It is again sharing the spotlight with something equally — if not more –significant.  This Mother’s Day is the first that I will be feted as a woman who is openly autistic. My “coming out” was International Women’s Day only three short months ago so every day brings with it a new level of awakening.  As I write those words, it feels much longer than three months perhaps because I feel like I have actually been building up to it for as long as I can remember. 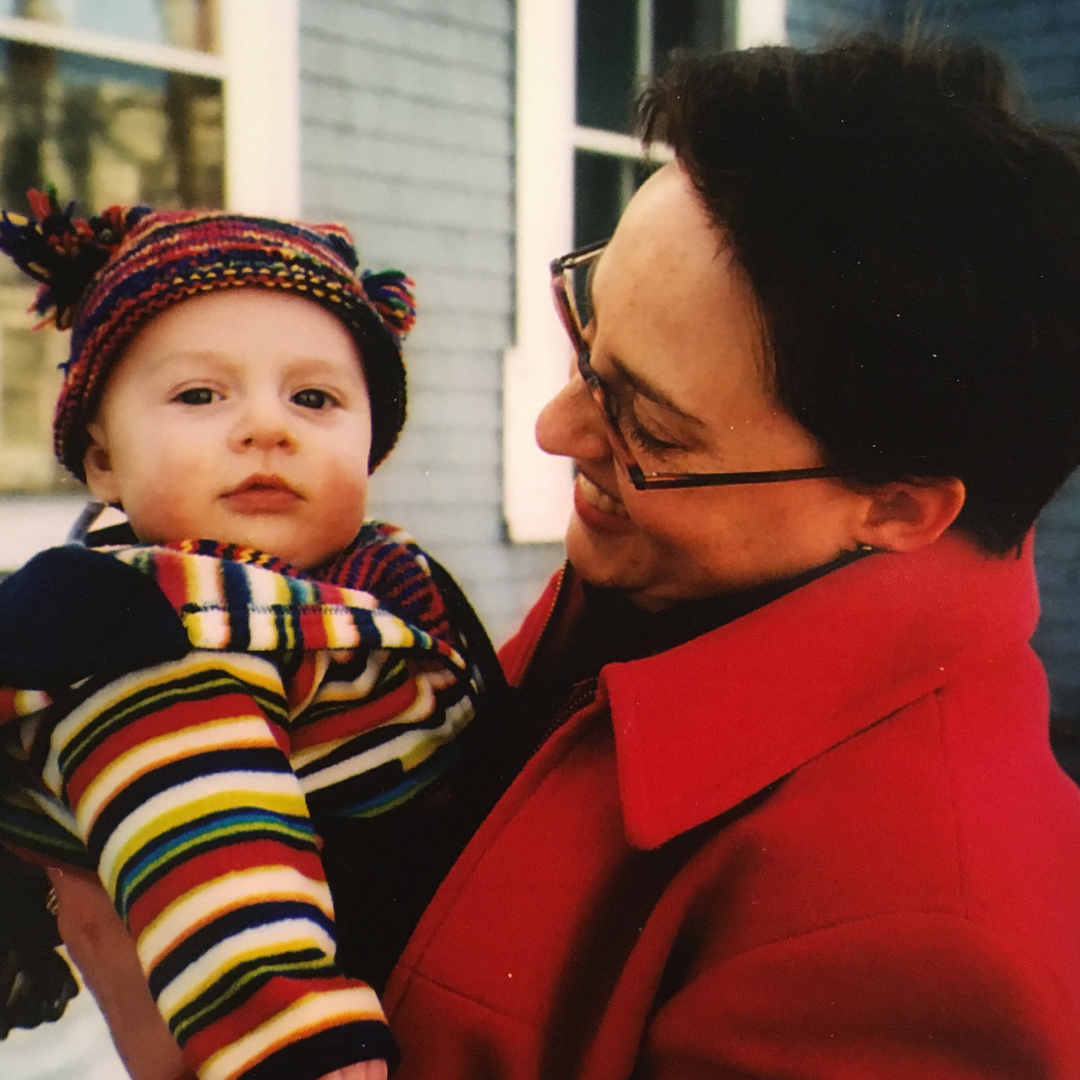 Wanda with Adrien in Spring 2004

I was always “different” or I internalized, based on reactions and comments, that there was something “wrong” with me. This view was mostly based on my thoughts and interests and therefore, how I communicated and interacted with my peers.  My wildly crooked teeth and pudgy frame did not raise my ranking on the likeability chart. The wide variance in my school marks only exacerbated my feelings of insecurity and loneliness. I tried my best to fit in but there was just no acceptance of a precociously verbal girl with an inquiring mind, known to her father as ”the little juggernaut” who liked discussing and debating politics and current affairs since she drank milk from a bottle.

My family did not aid in my desire to be part of the mainstream. I was the youngest of ten siblings with older than average parents. My non-conformist family took a new turn when I was eight with my mother moving to Toronto to pursue her second Masters degree at the Ontario Institute for Studies in Education. My father remained at home and served as provider and parent. This helped instill early the notion of equal opportunity but it also created a void in my life. It was paired with the onslaught of sudden, severe health issues that burdened my family for years.  I blamed it on a curse that had struck. The associated stress of such traumatic episodes slowly started seeping into my body. The output was anxiety and confusion, leading me to struggle both academically and socially.  I was left feeling marginalized. I craved acceptance and understanding even if it was only to be in the form of temporary relief from my daily life. The activities we explore in search of escapes of temporary acceptance are not always the best for us.  In fact, they often only cause more harm than good — if not in the short term, then definitely in the long term. That was not something as an adolescent I could have predicted. 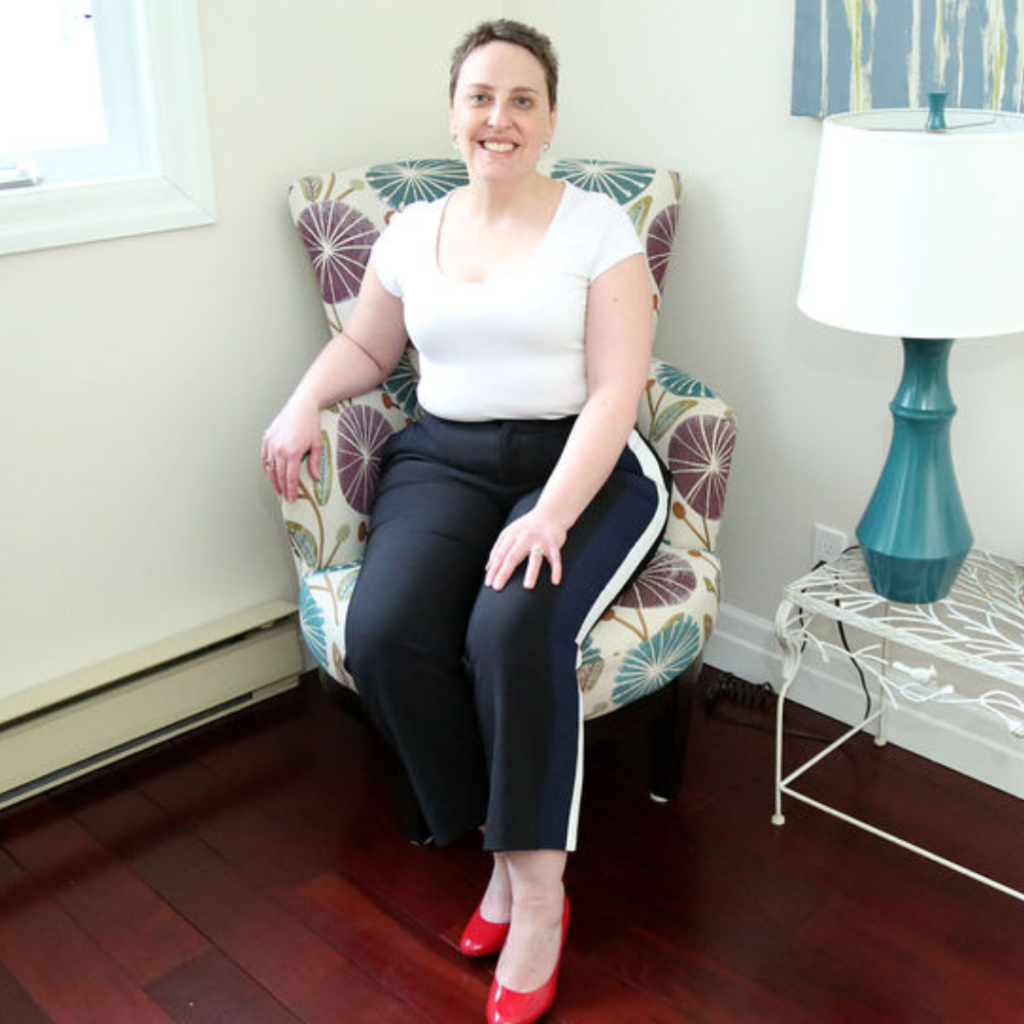 Wanda at her Liberty Co. office wearing her red shoes to symbolize the book “Autism in Heels” by Jennifer O’Toole and to celebrate women with ASD.

Life can have a way of ensuring wonderful opportunities emerge during challenging circumstances and this happened in 1986 with the entry of my first boyfriend, later husband. Our relationship lasted a decade, through high school and university completion and the first stages of careers.  We had a son in 1988 and although we had to admit we were not yet able to raise him, we have each enjoyed the good fortune of having a relationship with our son since he was five.  Appropriately for me, my first experience of motherhood was outside the mainstream pattern and yet again, I felt that everything about my life was going to be unlike my contemporaries.  When my husband, Steven told me he was leaving me and we subsequently separated, I mused if I was ever going to relate to my age group.  If I had felt twenty at eight, I felt fifty-two at twenty-six.

But life is not a stage and we do not make the casting decisions; if you attempt it your mind or body or possibly both will tell you that the act is over. Friday before Mother’s Day, May 12, 2017 I had a complete breakdown in front of my then supervisor. As they observed it they commented: “I am concerned about you in the long-term.”  I quickly processed those words:  What? Long-term? A voice inside my head said:  “if this is your long-term than this is your kids’ lives.” I fought back –- NO! And for the first time in my life, I actually admitted that I lived going from thing to thing and being fearful of what was lurking around the next corner. Ironically, the enemy was me.

I was diagnosed with ASD and PTSD in July, 2017 and today I am an #openlyautistic mother of two sons who also have #ASD.  Ryan still makes me laugh (even when he doesn’t say anything) and my birth son either shares my sense of humour or does a very good job pretending. He had a real taste of it when we were together in Alberta during Mother’s Day weekend last year. How I will spend this Mother’s Day may sound insignificant but it is actually very significant: I will be “real” Wanda. 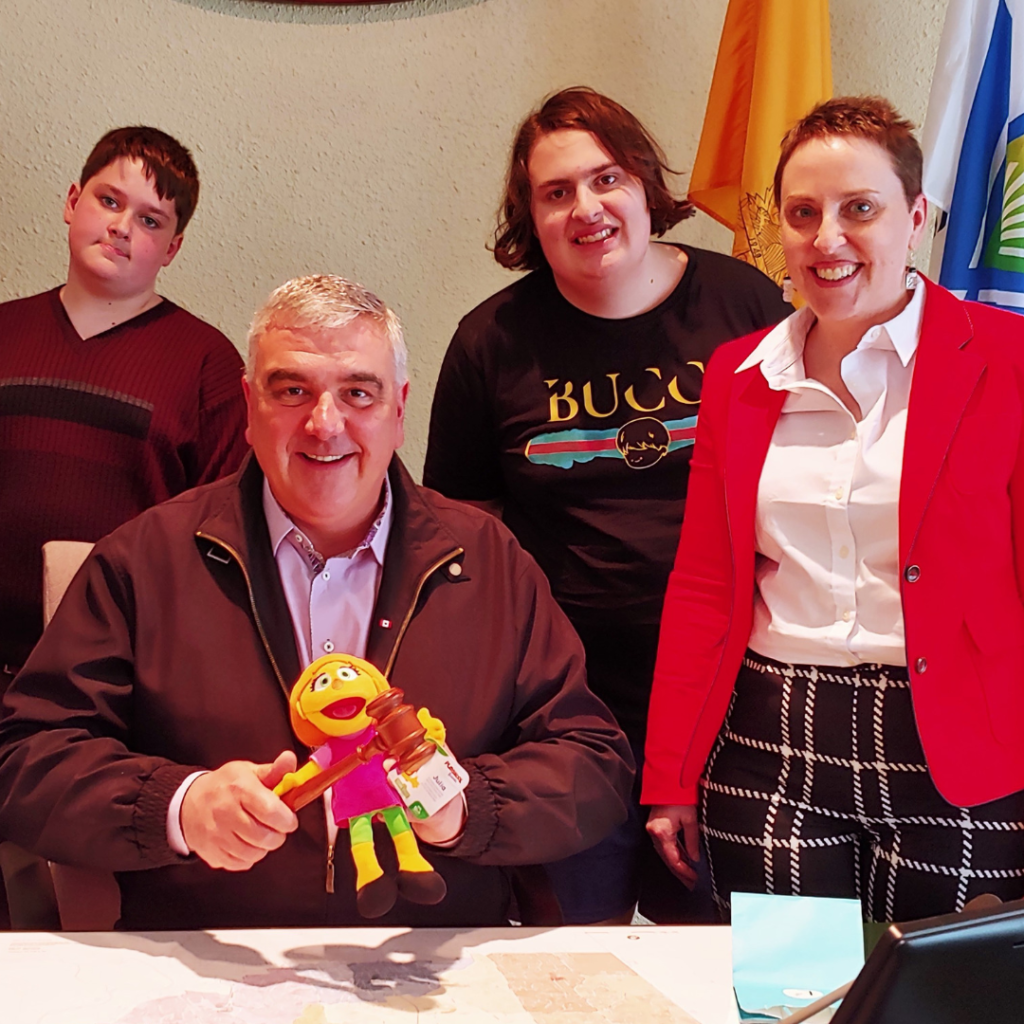 Wanda and her boys giving “Julia from Sesame Street” to the Mayor of Waterloo to celebrate Autism Awareness/Acceptance month.

A donation to Autism Canada is a gift you can give to a loved one in your life, which makes an impact for individuals and families living with autism. Free Mother’s Day e-cards are available with every donation. Donate Today!

Autism Canada wishes to publicly denounce the egregious claims made by Defence Counsel Psychiatrists who attribute the Alek Minassian’s actions to “his autistic way of thinking (sic. being) severely distorted similar to psychosis.