In October 2017, Autism Canada partnered with The Autism Research Institute and the Pacific Autism Family Network to co-host an international Think Tank on Aging and Autism. An international delegation of 27 individuals provided the perspectives of adults on the spectrum, researchers, clinicians, service providers, and opinion leaders in the autism field.

The two-days were organized around a series of presentations to discuss the current landscape in aging research with respect to autism, and set the stage for further discussions about building a collaborative agenda across international boundaries.

Participants identified three broad themes, and several sub-themes, in need of research or action regarding aging and autism. The three main themes were:

The resulting Summary Report – Aging and Autism: A Think Tank Round Table is the first comprehensive report of its kind in North America and is expected to generate momentum and opportunity to expand its scope and reach.

An excerpt from the report: 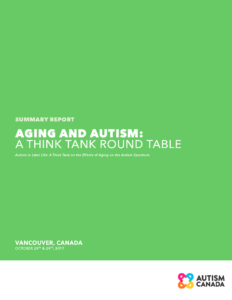 “Just like everyone, autistic adults want to be “amongst the living” rather than segregated. As many autistic seniors live with sensory dysphoria and are easily over- or under- whelmed, increased understanding and accommodations among the non-autistic population would promote greater inclusivity for individuals on the spectrum.” – Wenn Lawson, Think Tank Participant, October 2017.

Autism Canada, the Autism Research Institute and NeuroDevNet co-hosted the Scientific Symposium 2014, Examining a Multi-Systems Approach to Autism and the Environment: Challenges and Opportunities for Research. This two day workshop brought several leading autism researchers and clinicians together to gain a greater understanding of the scope of disciplines that relate to the study of autism, to foster cross-disciplinary collaborations for current and future autism research and to identify the research pathways with the greatest potential for significant discoveries.

We are pleased to bring you presentations from the Scientific Symposium 2014 Examining a Multi-Systems Approach to Autism and the Environment.

Emma Allen-Vercoe, PhD
The gut microbiota and why it is important in ASD

Autism Canada and the Autism Research Institute co-hosted the Scientific Symposium 2012, Exploring the Gut Brain Connection in Autism, in Toronto to explore the potential role of infectious agents in autism phenotypes. Experts from several diverse disciplines met to discuss the growing evidence for microbiological etiology in certain forms of Autism Spectrum Disorder. If infectious agents can be shown to play an important role in the etiology of autism, this offers an exciting and tangible opportunity for development of novel diagnostics, therapies, and preventive measures.

We are pleased to bring you the presentations from the Scientific Symposium 2012 Exploring the Gut Brain Connection in Autism.

We are encouraged by the recent studies in this field and continue to promote further research into the gut brain connection in autism. Our belief is autism is a whole body disorder not just a brain disorder. Recognition of this notion addresses many factors ignored and dismissed through other philosophies and provides not only better outcomes, but hope though better understanding and support.

We recommend you download and read the following papers: